Fifty years ago, in May 1968, Ricotta Jewelry was opened in Philipsburg by Joseph J. Ricotta at its present day location of 105 North Front Street, under the name of O’Brien’s Jewelry. The name was changed to Ricotta Jewelry in the early 1970’s. Joe’s son, James, worked with his father from the beginning, only leaving the business after high school, to obtain a degree in watchmaking and jewelry repair from Bowman’s Technical School in Lancaster, Pennsylvania. After returning, Jim, then twenty years old, met his future wife, Joan, seventeen, and they were married the following year. Joe Ricotta passed away in November, 1989, at the young age of fifty-seven. Jim’s wife, Joan, then came into the store to run the retail end. “All three of our children, Crystal, Tiffany and Jared spent a lot of time in the jewelry store, first helping with things like making bows, cleaning and working at sidewalk sales. They would play “watchmaker” with old broken watches and tools, which is the same thing our two oldest grandchildren, Tanner and Diem, have done, and our one year old twin grandsons, Giovanni and Giuseppe will probably, also, be doing when they are old enough. We would take our children with us to the jewelry and gift shows in Las Vegas, Pittsburgh, Philadelphia and Ohio.” Their son, Jared, is now a physician’s assistant at Penn Highlands Q-Care in Philipsburg and also does some clock repair (a trade which he has learned from his Dad) in the jewelry store. “A lot of our customers have watched our children grow up. We had named our girls with jewelry related names, but at the time, Jared was not a jewelry related name when we named him. Jared was a Biblical name that we both just liked. However, now, when a number of Jared’s friends recently got engaged, the fiancés said, “He went to Jared’s!”

Jim and Joan have attended many seminars on all aspects of operating a jewelry store including diamond grading from Gem School America. They also have attended many jewelry shows over the years including the world’s largest, the JCK Jewelry Show in Las Vegas, numerous years. This past April, Jim and Joan were guests at the Bridge Event at Stuller, Inc., in Lafayette Louisiana, with three days of seminars on the latest changes in the jewelry industry. Being in business for fifty years, they have access to a lot of different reputable suppliers and will help you find exactly what you are looking for no matter how small or large the sale is. They can customize or create that special piece of jewelry you have in mind, when larger chain stores are not willing to take the time and/or possibly do not have someone in the store with the skills to make those changes for you. “We treat all customers with the same friendly courteous respect no matter how much they want to spend, and we never try to pressure anyone into buying or spending more than they want to or can afford to spend. Having a happy satisfied customer, who comes back to us and tells their friends of their great experience of shopping with us is our goal.”

Jim’s time is spent mostly at the workbench, specializing in antique pocket watch repair for people from all over the world, and doing watch and jewelry repairs for other jewelry stores in Pennsylvania and other states along with the watch and jewelry repairs that come through the front door daily. “A while back, we had a customer in looking for a new watch because another jewelry store had said that their watch could not be fixed. Our employee, Shirley Ruggiero, said, “My boss can fix that. He specializes in watchmaking and he can fix that.” All the watch needed was a crown to wind it! Jim fixed the watch, and we had a very pleased customer. We have a large box of thank you notes and letters from customers who are so happy when Jim has restored a family heirloom watch, with some having been told by others that their watch could not be fixed. Customers find out about Jim’s expertise watch repair mostly by word of mouth from other satisfied customers. We have friends who own jewelry stores in reasonably drivable proximity, and they send their watch repair customers directly to us.

Another interesting aspect about Ricotta Jewelry is the building itself. The Philipsburg Historical Society has records showing that the front portion of our building dates back to the 1830’s (possibly the oldest building left on Front Street). However, the building was originally located on Pine Street, down from the Schoonover corner; and at that time, it was owned by Samuel Way and used as a shoemaker shop and Squire’s Office. A map dated 1861 shows that the building had been moved to the corner of Laurel and Front Street and used for a store by Daniel Barret. A map dated 1897 shows the building at its present location where it was remodeled and owned by William Miller, a merchant tailor. Two extensions have been added to the front of the building over the years.

October 2018 update: We are happy to announce the addition of one more granddaughter, Giuliana, to the Ricotta family! 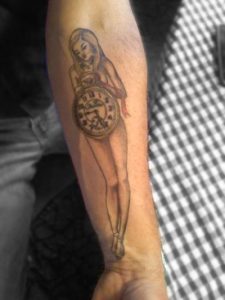 This is a photo of Jim’s tattoo. It represents his 35th Wedding Anniversary with wife Joan. The time on the pocket watch is 9:27 as they were married September 27, 1975. The second hand is on 35, representing the 35 years together. The woman holding the pocket watch is Joan.